Many of us look forward to spring’s arrival as the best time to watch the forest reawaken after winter as wildflowers gradually begin to bloom.  But Spring also stirs to life a host of invasive, non-native plants which compete with our native wildflowers and trees for essential resources.  Invasive, non-native plants reduce biodiversity, disrupt native plant-animal associations, and alter natural regimes and cycles (such as fire and hydrology).  Invasive species are said to impact nearly half of the species currently listed as threatened or endangered under the U.S. Federal Endangered Species Act.

Most of us are unaware of which plants are invasive and which are not, or the ways in which invasive plants like oriental bittersweet, multiflora rose and garlic mustard threaten our region’s biodiversity and natural heritage.  That is why Governor Beverly Perdue declared the first week of April as North Carolina’s Invasive Plant Awareness Week.

SAHC plans to honor the week by posting information about invasive species in our area. We are also hosting three public work days throughout the month to tackle invasive species and other management priorities on some of our high quality properties in Buncombe County’s Sandy Mush Valley.

This is a great time to talk about multiflora rose because if you go on a walk through the woods this time of year, thickets of multiflora rose are easy to see from far away.  They are one of the first understory shrubs to leaf out in the spring, so they appear as bright green patches in an otherwise grey-brown forest. They are lighter in color than the evergreen rhodo and mountain laurel.  And, if you don’t see them in the places you like to roam, that’s a good thing because they are invasive and nasty!

Multiflora rose was brought from Asia to the US in the 1860s to serve as rootstock for ornamental roses.  It was later promoted for a variety of uses: erosion control, fencing, crash barriers on highways, and wildlife shelter and food.  The problem with multiflora rose is that it forms impenetrable thickets that clog up stream banks and wetlands and displace native understory plant species. It’s unforgiving thorns can seriously dampen your spirits when you encounter a thick patch of it blocking your way as you walk through the woods!  Multiflora rose spreads easily because birds eat the fruit and disperse their seeds everywhere.  An individual shrub may produce 1 million seeds annually!

What you can do: Practice invasive plant control on your own property by eradicating invasive species or preventing seed production by pruning or cutting.  You can distinguish multiflora rose from other rose species by its upright arching stems and fringed stipules. You can also join us this Saturday, April 7th, as we work to eradicate the rose on a wildflower-rich property in Sandy Mush.

Have you driven west on I-40 or along our rural roads and noticed trees with large brown nut-looking capsules and fuzzy orange buds (with purple trumpet flowers and large elephant-ear leaves during the growing season)?  That’s princess tree…and its becoming increasingly easy to find.  That’s because each capsule produces thousands of tiny, winged seeds that travel easily in the wind.  Princess tree (Paulownia tomentosa) establishes easily in disturbed areas and can grow up to 15 feet in a year!

Princess tree is native to China, where it is said it is planted when a baby girl is born. The tree matures as the girl does, and when she marries, the tree is cut down and the wood is crafted into items for her dowry.  That’s a romantic story, but the tree is the protagonist of a much less romantic story here in the southeastern U.S.  Just see what portions of Linville Gorge look like post-fire, where princess tree seedlings are out-competing all the native tree species.  The end of that story doesn’t look so good for those of us who value biodiversity and functioning ecosystems.

What you can do:  Observe the growth habits of the plants you choose for your home landscaping. If you notice you have rapidly growing plants that produce copious seeds, learn more about that particular plant species to be sure it is not considered invasive in your region.  Some good native alternatives to princess tree include: eastern redbud (Cercis canadensis), umbrella tree (Magnolia tripetala), Carolina silverbell (Halesia carolina), and yellowwood (Cladrastis kentukea).  Note: if you plan on removing any princess trees from your property, make sure to check for resprouts next year!

Garlic mustard (Alliaria petiolata) is native to Europe, but can now be found throughout much of the U.S. and the world. It was first documented in the U.S. in 1868 in Long Island, NY. It is said to have been cultivated for its medicinal and culinary uses. Garlic mustard is a biennial plant, which means it grows over a period of two years. The first year it produces a clump of leaves that stay close to the ground. The second year it sends up a tall stem, flowers, and then finally seeds. A single plant can produce hundreds of seeds that easily scatter many feet from the parent plant.

Garlic mustard has a strong, garlicky odor, but what really stinks about it is what it does to the forest floor once it gets a foothold. It creates conditions that are favorable to its own existence, while simultaneously creating unfavorable conditions for many other plant species. Garlic mustard is allelopathic, which means it produces chemicals that get into the soil and inhibit the mycorrhizae other plants depend on to grow. Even some butterfly species suffer because when they mistakenly lay their eggs on garlic mustard, the eggs and larvae fail to survive.  Deer and other herbivores don’t like garlic mustard, either, so they leave it to flourish, preferring to nibble on other plants, which further compromises native plant populations.

Tree-of-heaven (Ailanthus altissima) was first brought to the US from China in 1784 by a gardener who thought it would make a nice ornamental planting.  The idea caught on and by the 1840s, it was widely available in nurseries and commonly planted as a street tree.  It arrived separately to California during the gold rush, by way of Chinese immigrants, who used the tree medicinally to cure everything from mental illness to baldness.

However, before long, the tree began to lose its celestial reputation. Tree-of-heaven is a prolific seeder and fast grower–one study states that it is the fastest growing tree in North America! It can tolerate very poor soils and pollution, full light and partial shade, and sends up new sprouts easily.  It forms dense thickets and produces allelopathic chemicals which inhibit other plants from growing. Therefore, you’ll often see homogeneous stands of it growing along roadways, which is the perfect way for it to spread.

“There’s a tree that grows in Brooklyn. Some people call it the Tree of Heaven. No matter where its seed falls, it makes a tree which struggles to reach the sky. It grows in boarded up lots and out of neglected rubbish heaps. It grows up out of cellar gratings. It is the only tree that grows out of cement. It grows lushly…survives without sun, water, and seemingly earth. It would be considered beautiful except that there are too many of it.”
—A Tree Grows in Brooklyn, Betty Smith

Tree-of-heaven has another shortcoming that has helped it to lose favor: many people think it stinks of “burnt peanut butter.” I think it smells like Cheerios. In Chinese its name means “stinking spring.” Smell is one way you can identify the tree. It is important not to confuse it with other native trees that have similar compound leaves and/or habitats, such as sumac, walnut, or pecan. You can distinguish the tree-of-heaven by the shape of the leaflet. Each leaflet has one or more glandular teeth along the lower margin (edge), but otherwise the leaflet margin is entire (lacking teeth).

What you can do: Try to use regionally native plants when deciding what to grow in your garden and around your home. Native plants are already well-suited to the area and rarely get out-of-control. Consult someone you trust who knows the native environment in which you live to match the right plant to the right site conditions.

Chinese silvergrass (Miscanthus sinensis) is a tall, densely-bunched, perennial grass you will often find growing along roadsides.  It grows 5-10 feet tall and produces showy, feathery, silver to pink plumes in early fall. The grass remains standing year-round. These characteristics have made it a frequently-used ornamental planting; however, it easily escapes landscaped areas and will readily establish itself in disturbed areas, such as roadsides, field edges, and areas that have been burned.  While it prefers full sun, it will grow in sparsely forested areas and openings. Like many of the other invasive species mentioned this week, it produces thousands of wind-borne seeds and can resprout from pieces of rhizomes.

The problem with Chinese silvergrass is that it forms dense infestations which displace native vegetation and can create large monocultures that alter natural ecosystem functions. While some humans might find it attractive, wildlife doesn’t have much use for it.  Even worse, it is highly flammable, and therefore, poses a great fire hazard where it is found.
Chinese silvergrass is still widely used as an ornamental planting and several cultivars with different names exist in the horticultural industry.  Therefore, it is important to refer to the plant by its scientific name, Miscanthus sinensis. You may hear that other species or varieties of the genus Miscanthus are safe to plant because they are not invasive, or because they have been bred to have sterile seeds, but be wary!! It is very hard for plant sellers and distributors to be 100% certain of such claims.

What you can do: Buy nursery-propagated plant material from reliable growers. If the exact identity of the plants you buy is uncertain, avoid it or seek the advice of other authorities. Consider using the following native alternatives in your own landscaping projects: big bluestem (Andropogon gerardii), switch grass (Panicum vergatum), or Indian grass (Sorghastrum nutans). 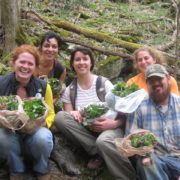 Reflecting on Spring and Stewardship at SAHC 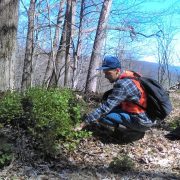 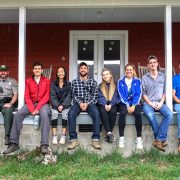 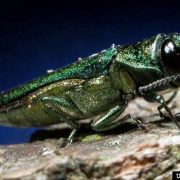 Coming to a forest near you... Emerald Ash Borer 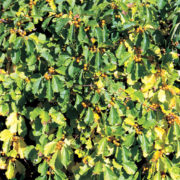 The Bitter, and Not So Sweet, Story of Oriental Bittersweet in Western North Carolina 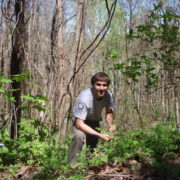