SAHC and our Roan Stewardship partners met in summer 2014 to discuss the growing threat posed by the invasion of feral hogs into our mountain landscapes and how to combat their spread. These non-native animals threaten the health of our ecosystems including impacting rare species, destroying fragile habitats, and contaminating water sources. Since then, we and our partners have made important strides in addressing the issue of feral hogs in the Roan.

“Working with our partners, including USDA Animal and Plant Health Inspection Service – Wildlife Services (APHIS), we began initial monitoring and trapping efforts on the Roan in winter 2014,” said Crockett. Those efforts were quite successful — hogs were documented, trapped, tested for disease, and removed from both Mitchell and Avery counties. A number of trapped hogs tested positive for either Swine brucellosis or Pseudorabies.

“Feral hogs can spread disease to humans, our pets, and livestock,” added Crockett.

About the same time that SAHC and our partners began coordinating efforts in the Roan, the problems caused by feral hogs gained national attention. In 2015, APHIS received federal funding to implement a collaborative, national feral swine management program in all 39 states where there is a recognized feral swine population.  The overarching goal of this APHIS National Feral Swine Damage Management Program is to protect agricultural and natural resources, property, animal health, and human health and safety by reducing feral swine populations in the United States.

“APHIS will reduce problems by suppressing populations in states where feral swine populations are large and widely distributed,” explained Crockett. “In States where feral swine are emerging or populations are low, APHIS will cooperate with local partners to implement strategies to eliminate them.  SAHC’s existing, multi-agency partnerships in the Roan qualified us to submit the Roan Highlands project for consideration under the new APHIS program.”

In 2016, SAHC will continue to coordinate the Roan Feral Hog Working Group and support trapping and monitoring work. We hired Kaitlin Shannon, an intern from UNC Asheville, to install and check wildlife cameras for hog activity, and we are partnering with students from Virginia Tech and other universities to study hog diet and movement on the Roan.  This year, we will also work with our partners to focus on educating landowners, farmers, hunters, and recreationists about the dangers and impacts posed by feral hogs.

“By using a large-scale, multi-agency approach, we hope to eradicate this destructive species from our mountains,” concluded Crockett.

Perspective – On the Roan with Roan Stewardship Intern Kaitlin Shannon

“As a current student at UNC Asheville, it has been my pleasure to serve an internship with SAHC. In May I will complete my B.S. in Environmental Studies, with a concentration in Ecology and Field Biology. For me, this internship has been a segway from the classroom into the hands-on approach of conservation field work. I worked in conjunction with graduate students of Virginia Tech and members of APHIS to design a study to monitor feral hog populations in and around the Roan Highl

ands. It’s been my job to hike to the specified locations and set up wildlife cameras to detect the presence of hogs — which is important because once we have noted where the majority of the hog populations are located, we can more effectively plan to remove them.

I’ve gained experience with so much more than simply helping to design a study. Most importantly I’ve been able to surround myself with the land that SAHC works so diligently to protect. It’s clear as you ascend to the peak of Big Yellow that you’re standing in a very special, sacred place. The damage caused by these hogs cannot go unnoticed, and I am honored to be apart of a team working to mend such an important place.

SAHC is such a unique land trust and I encourage anyone who is curious about the work that they do to take the time to volunteer.” 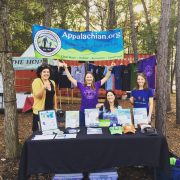 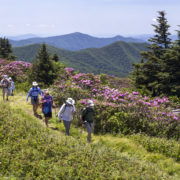 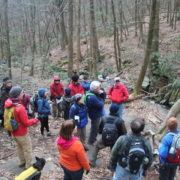