“After several weeks of desk time at the office, followed by several days experiencing the worst that this year’s flu season had to offer, cabin fever prompted this SAHC AmeriCorps steward to take advantage of a free Sunday to pay a visit to one of our protected properties in Haywood County, only 30 minutes west of Asheville: the Rough Creek Watershed.

Rough Creek Watershed is an 870-acre conservation easement held by the Clean Water Management Trust Fund, co-managed with  the Southern Appalachian Highlands Conservancy, and owned by the Town of Canton. SAHC was instrumental in the protection of this Smoky Mountain jewel. The watershed, which drains into Beaverdam Creek, and then into the Pigeon River, used to serve as the primary water source for Canton, but now it primarily functions as a nature preserve and public pie slice of undisturbed open space.  One of the cool things about this particular conservation easement is that it is accessible to the public. The watershed contains approximately 10 miles of well-maintained trails open for conservation-conscious hikers and bikers to explore.

On the day I visited Rough Creek, the temperature was supposed to get no higher than 33 degrees, the wind had to be at least 30 miles per hour, and I had barely moved my body since getting trounced by the flu. However, I was determined to make the climb up to the ridge on the western boundary of the property, where I knew I would be rewarded with panoramic views of the Newfound Mountains. I was hoping this hike would serve as a warm-up for our ambitious spring monitoring season, which includes visiting 63 conservation easements in about three months.

Winter is a fun time to go hiking. It may seem like a cold and dead time of year, but signs of life are everywhere.  I think you can observe more because there is less green growth to obscure everything.  I can see landforms better and distinguish between tree species by looking at bark and twigs.  Animal tracks persist in the snow and remnants of last year’s herbaceous plants linger like forensic evidence at the scene of a crime.

After hiking steadily upwards for approximately 2 miles, I did reach the ridgeline; and I was almost blown away and blinded by the piercing wind, the bright sun reflecting off a thin layer of snow at my feet, and the stunning views before me!  After pausing a moment to mimic a big lone oak tree, I continued along the ridgeline and was delighted to spy yet another sign of seasons past: brilliant red clusters of sumac berries.

Wild sumac (Rhus typhina or Rhus glabra, not to be confused with poison sumac, Toxicodendron vernix) is always a fun plant to encounter when hiking not only because its appearance is so striking, but also because it’s like stumbling into an outdoor pharmacy with a soda fountain and a candy section!

If the berries aren’t too old and it hasn’t rained recently, you can lick the red cluster cone like a lollipop.  The berries are covered with a sweet and tangy fuzzy coating reminiscent of a SweeTART.  The taste is due to a concentration of malic and ascorbic acids (Vitamin C).  Sumac was used by the Cherokee and continues to be used by herbal medicine aficionados for treating everything from cold sores to diarrhea to diabetes, fever, and arrow wounds.  My favorite thing to do with sumac is to soak the berries in a glass of cold water, which quickly transforms into a refreshing tea similar to pink lemonade. The berries are normally best after they ripen in late summer, but the ones I encountered on the ridge persisted through February and still held their flavor.

My hike continued for another 5.5 miles through a quiet forest laden with hidden richness and treasures.  Days later, I am so delighted that places like the Rough Creek Watershed exist close to my home; I feel blessed to have had the opportunity to come to know them and appreciate them; and I am so thankful that organizations like SAHC work with passionate  community members to protect these place for everyone to benefit from.” 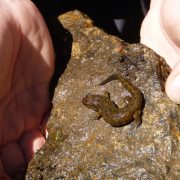 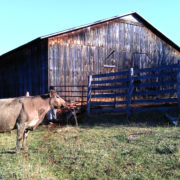 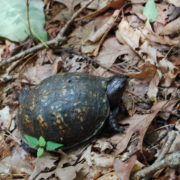 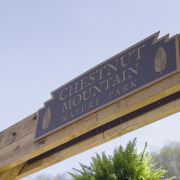 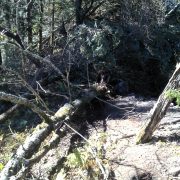 Post-Storm Clean-up on your Conservation Easement 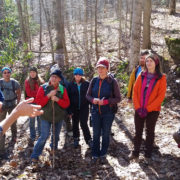 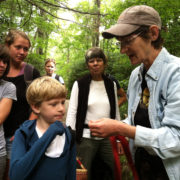 Devil’s Britches and Bark, Buds, Nuts – A pint, a party, a presentation...
Scroll to top