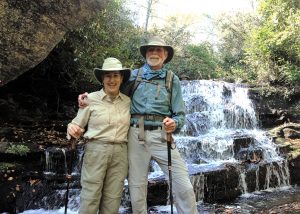 The Catawba Falls Hike was led by our new AmeriCorps Conservation Education and Volunteer Member Emily Adler, along with conservation property life estate holders Rick and Melinda. The group began on an SAHC conservation easement, hiking down to the Catawba Falls on a route few people get to visit. END_OF_DOCUMENT_TOKEN_TO_BE_REPLACED 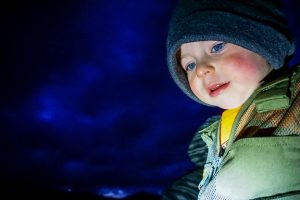 An intrepid group of hikers braved the fierce February wind to enjoy a night hike at our recently protected Flatwoods Pasture property. This scenic property added about 145 acres to the over 10,000 acres SAHC has helped protect in the greater Sandy Mush landscape, and we intend for it to continue being grazed, thus remaining active farmland. We were joined on this hike by Christian Hunt of Defenders of Wildlife, who discussed red wolf recovery efforts and challenges. At the end of the night, the group all gave our best red wolf howl to the February Snow Moon! END_OF_DOCUMENT_TOKEN_TO_BE_REPLACED

The 693-acre Hampton Creek Cove State Natural Area (HCC SNA) is a breathtaking haven for wildlife with ample opportunity for outdoor recreation. Time spent visiting the pastoral cove, trekking the miles of hiking trails, or fishing cold trout streams will be well spent. Check out these recent updates from the cove! END_OF_DOCUMENT_TOKEN_TO_BE_REPLACED

“Highland Brewing Company’s seasonal release of Devil’s Britches Red IPA kicked off the first “For Love of Beer & Mountains” partnership hike of 2014 at Cataloochee Ranch. Hikers trekked through deep snow to the top of Hemphill Bald (5,540 ft. elevation), where they leaned about SAHC’s first conservation easement as well as feral hog damage and the natural history of the area.

In late February the Southeast experienced a large snowstorm, accumulating 6 inches of snow in the Asheville area and more in higher elevations, but the Devil’s Britches hikers were undeterred. On the Sunday after the storm 17 hikers made their way out to tackle the mountain with SAHC and Highland Brewing. END_OF_DOCUMENT_TOKEN_TO_BE_REPLACED

To solidify their partnership and educate the public, the organizations lead guided hikes together on the peaks each seasonal beer is named after.

Saturday, November 4th marked the third hike the partners have led together and was on the West Ridge Trail which crosses each of the Seven Sisters mountains. The hike was in honor of the release of the Seven Sisters abbey-style ale, a classic Belgian Ale that features sweet aromas and a hint of nuttiness.

The Seven Sisters are the mythical “daughters” of Graybeard, the tallest peak on SAHC’s 2,450 acre Montreat conservation easement. They are seven ascending peaks located south of Graybeard Mountain. Their names are Tomahawk (elevation 3,680 ft.), Little Piney or Stomping Knob (3,960 ft.), Big Piney (4,180 ft.), unnamed sister (4,360 ft.), Forked Ridge Knob (4,511 ft.), unnamed sister (4,830 ft.), Little Slaty (5,260 ft.), and the tallest sister, Big Slaty or False Graybeard (5,260 ft.). These seven peaks make up the western border of the conservation easement. The easement is part of several thousand acres of contiguous forested lands that is vital to the unique plant and wildlife populations and in protecting headwater streams of the French Broad watershed from sedimentation and other pollution. Highland Brewing Company realizes that their high quality beer would not be possible without the fresh water that is safeguarded by the Montreat easement and the other surrounding forested lands.

To celebrate, all the hikers got the opportunity to taste the Seven Sisters ale when the group reached the summit of the third sister, Big Piney. It was an unusually cold November day and the views were made even better by snowy ridges in the distance. Overall it was a rewarding, challenging hike and everyone fell a little more in love with beer and mountains…

Sorry, no posts matched your criteria