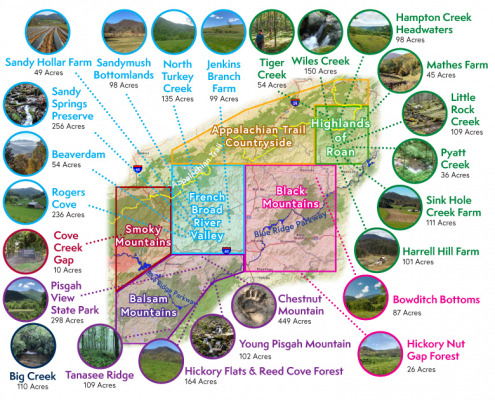 Looking back as we head into the final stretch of 2020, we all know that this year has been far from ordinary. On a positive note, it has been a record-breaking year for local conservation efforts! Since the beginning of January, Southern Appalachian Highlands Conservancy has closed on the protection of more than 2,600 acres across the mountains of Western North Carolina and East Tennessee, with additional projects scheduled to wrap up by year-end. Several of these have been in the works for many years.

“It is a testament to the commitment of SAHC members, staff, and conservation-minded supporters that we have been able to complete these projects during extraordinary circumstances, and we are grateful to all the people who make this remarkable work possible,” says SAHC Executive Director Carl Silverstein. “There is something tangible and reassuring in preserving land – it’s something you can put your hand on. These conservation projects help preserve cultural connections to the past, places to connect with nature, and vital resources we rely on now, and which will be increasingly critical in the future.” END_OF_DOCUMENT_TOKEN_TO_BE_REPLACED 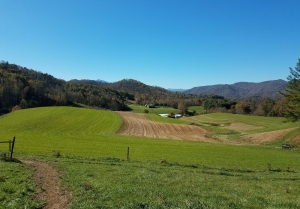 In a picturesque landscape just south of the Roan Massif, farms with rolling fields, pastures, and forests contain a rich repository of stories and memories, along with agriculturally important prime soils and stream sources.  Sam and Ronda Silver, the seventh generation of a local farming family, wanted to make sure that their beautiful Century Farm would be passed down to future generations intact. So, they worked with SAHC to protect 111 acres with an agricultural conservation easement. END_OF_DOCUMENT_TOKEN_TO_BE_REPLACED 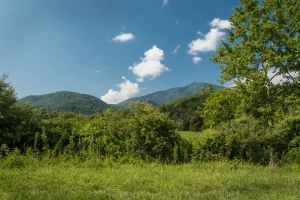 The Bowditch Bottoms project has been a long time in the process – beginning in 2014 – and we are thrilled that it successfully closed in June! This 87-acre property in Yancey County contains important soils, farmland, undeveloped forested and non-forested habitat for wildlife, headwaters to the South Toe River, and intact wetland and riparian corridors. It is visible from the Mount Mitchell Scenic Byway and several higher-elevation vantage points in the Black Mountains and the Highlands of the Roan. END_OF_DOCUMENT_TOKEN_TO_BE_REPLACED 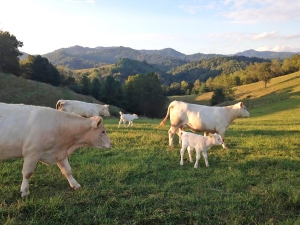 The Highlands of Roan are known for rare and fragile ecological communities as well as magnificent, panoramic views studded with scenic mountain farms. At the end of 2019, SAHC permanently protected 127 acres of beautiful family farmland in Mitchell County, preserving bucolic views along NC Hwy 226. The Byrd Charolais* Farm is an agricultural gem, with water conservation practices in place and a long heritage of mountain farming. One of just a few farm preservation projects SAHC has completed in the Highlands of Roan, the property is now permanently protected for future generations.

* Charolais are a breed of cattle which originated in France in the historic Charolais region. END_OF_DOCUMENT_TOKEN_TO_BE_REPLACED 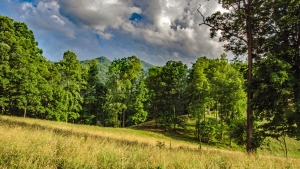 In the Sandy Mush farming community, scenic views of fertile bottomland, rolling pastures, and distant mountain ridges create a stunning backdrop for those who work the land. Now, SAHC has conserved another tract of farmland here, adding to a network of protected agricultural lands and wildlife corridors throughout Sandy Mush.

Sections of Sandy Mush Creek and Hogeye Branch run through the tract, which contains prime soils (a designation for soils of national importance) as well as soils of statewide and local importance. Almost half (45%) of soils on the tract are considered prime, locally or statewide important soils. Found along waterways and formed over long periods of time, these soils are important agricultural resources — and relatively rare in mountainous areas. Unfortunately, the low-lying, fairly flat bottomlands where we find these soils are also sought after for easy development. Both Aubrey and Rieta grew up in families with long farming traditions and wanted to see this farmland protected for future generations.

“We’d like to see the Sandy Mush area stay as undeveloped as possible,” shares Aubrey. “It’s one of the few places in the county you can still go to see the beauty of natural spaces and farmland.” END_OF_DOCUMENT_TOKEN_TO_BE_REPLACED 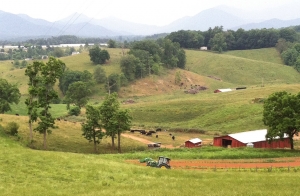 Brandon Hensley has no illusions about farm life in WNC — it’s hard work, with sparse financial rewards. However, a deep connection to his family’s land kept him working with SAHC over the lengthy 5-year process to permanently protect a beautiful, productive farm in an area pinched by increasing residential development.

In March 2019, we closed on the conservation easement protecting the 118-acre Ridgeview Farm in Buncombe County. Located just 2 miles from our Community Farm, this historic homestead farm contains a high percentage of agriculturally important soils. Brandon, a young farmer in his mid-30s, is carrying on his family’s legacy as the 5th generation to work this land. END_OF_DOCUMENT_TOKEN_TO_BE_REPLACED 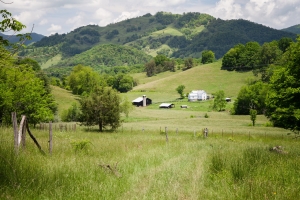 Hugged by mountains and tucked away in the scenic Crabtree community of Haywood County, Rogers Cove contains beautiful rolling pastures and forested hills that stir the imagination. We have permanently protected 385 acres of productive, scenic farmland in this cove through agricultural conservation easements.

“The Rogers family has farmed this land for at least four generations and wanted to see it stay farmland forever, which is why they protected their land with SAHC through agricultural easements,” says Jess Laggis, SAHC’s Farmland Protection Director. “Beyond all the beauty and ecosystem services this land protection provides, it also supports some of the kindest farmers you could meet in maintaining our mountain farming heritage.” END_OF_DOCUMENT_TOKEN_TO_BE_REPLACED 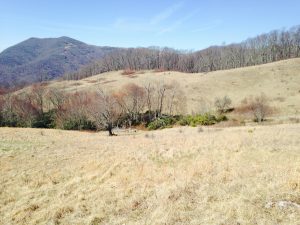 “This funding allocation is unique because of its size, and because it is directed specifically for the protection of important soils as well as clean water sources for our regional watersheds,” said Executive Director Carl Silverstein. “We have successfully used federal funding to accomplish significant farmland conservation projects over the past decade, and this new allocation opens the door for us to work with willing landowners to protect some of the most crucial, large contiguous tracts of farmland remaining in the mountains. This is an incredible success, reflecting well on the perseverance and dedicated, collaborative efforts of the Blue Ridge Forever partners ”

The partnering Blue Ridge Forever land trusts plan to use the federally allocated funding to protect mountain farms from a change in land use through voluntary agricultural conservation easements. Agricultural conservation easements protect farmland and rare prime soils for food security for future generations, while also protecting the cultural heritage, scenic vistas, and farm-to-table establishments that drive tourism to the region. However, the benefits of this new funding will reach much further than the mountains. The nine river basins emanating from the WNC region contain the headwater sources for drinking water for millions of people throughout the Southeastern United States.

“We are thrilled to bring this allocation to Western North Carolina to keep mountain farms farming, and gratified the region is receiving national recognition for its importance as a freshwater source for the Southeast,” said Jessica Laggis, Blue Ridge Forever’s director. “This funding represents the culmination of years of dedication in conservation planning and relationship building. WNC land trusts have been laying the foundation for this RCPP success for a long time.”

In the past, SAHC used the same federal funding source to successfully protect several farms, including the 320-acre Reeves Homeplace Farm in Madison County, the 90-acre Watalula Farm in Leicester, 116 acres of fertile bottomland in Sandy Mush, and 80 acres of bottomland in Fairview in Buncombe County.

“The ability to protect nationally significant prime soils and water quality with the same funding source is a dream come true,” said Farmland Program Director, William Hamilton. “This funding will have a permanent, positive impact on WNC, and will be a gift that keeps on giving for generations to come. It provides us with the opportunity to help preserve some of the biggest and best farms in the region. One of the victories of this funding is that it obligates $8 million to be used exclusively for purchase of agricultural conservation easements in western North Carolina.   In the past we were competing statewide for these same federal funds, and the federal allocation to the entire state of NC ranged between $500,000 – $3.5 million.  So, securing $8 million for western North Carolina changes things in a dramatic way for us.”

Mountain farms are increasingly vulnerable to a change in land use, due in part to extraordinary development pressure and rapidly rising land values. Large mountain farms are particularly scarce because they are prone to fragmentation and development as they pass from one generation to the next, yet they are critically important for clean water because they encompass significant water sources. SAHC hopes to use this funding to continue building on more than a decade of successful farmland conservation.

“NRCS has created a unique opportunity with RCPP that recognizes the power of partnership,” continued Laggis. “Farmland preservation is great cause everyone can get behind; it brings a diverse array of stakeholders together in a beautiful way. We especially want to thank Principal Chief Patrick Lambert of the Eastern Band of Cherokee Indians, Congressman Patrick McHenry, Senator Richard Burr, Governor Pat McCrory, Representative John Ager, Representative Joe Sam Queen, and the NC Department of Agriculture for supporting farmland preservation in Western North Carolina.”

This November we protected 32 acres of farmland in the shadow of Crabtree Bald in Haywood County. Located along Rush Fork Creek and adjacent to NC Scenic Byway 209, the farm contains prime agricultural soils and has been in the same family since the late 1700s.

Currently used for cattle grazing, the land has been used for various crops over the years, including tomatoes, corn and hay. It is now permanently protected for agricultural use under conservation easement with SAHC. Fertile soils on the property include prime farmland (Saunook loam), soils of statewide importance and of local importance. END_OF_DOCUMENT_TOKEN_TO_BE_REPLACED

Sorry, no posts matched your criteria