Ken and Lotta Murray have transitioned from the hustle-and-bustle of Washington, DC, to the quiet coves of mountainous East Tennessee, carving out an idyllic home and garden on a tract where Ken’s great-grandfather homesteaded over 160 years ago. Introduced to SAHC while managing one of our conservation easement properties, they have become committed philanthropic leaders and engaged members, frequently exploring the Southern Appalachians through our guided group hikes.

Ken Murray became acquainted with SAHC when his mother, Katharine Tilson Murray, had the foresight to permanently protect the family homeplace with a conservation easement in 1999. Since retiring to the land in Unicoi County, where he often vacationed as child, Ken and his wife Lotta have become passionate supporters of SAHC, joining our Gray’s Lily Leadership Circle and frequently participating in guided outings on our other protected tracts.

After Ken retired from the Natural Resources Conservation Service of the U.S. Department of Agriculture in Washington, DC in 2011, he and Lotta hiked the Appalachian Trail together for six months.

“It was amazing, the most incredible thing I’ve ever done,” recalls Lotta. The timing was excellent. “It was a good transition, coming from the remote experience of hiking the Trail to live at the Tilson homeplace, which is also quiet and out-of-the-way. A simple lifestyle is what we wanted.”

Ken’s decision to return to the family homestead and enthusiasm for SAHC stem from summers exploring and adventuring in this wooded corner of TN.  Throughout childhood, he spent time on the property during school vacations.

“When I was a kid, I couldn’t imagine why everyone in the world wouldn’t want to be here,” Ken said. He and a neighbor would trek through the creeks and cove. But it wasn’t all play — a framed photo in the farmhouse shows Ken as a youth, discing ground for the garden with a team of mules.  “For a kid growing up in the suburbs of Connecticut this was a really cool place,” he added. The experiences sparked a passion for the land that has only gotten stronger over the years.

In 1977, Ken began making improvements and repairs to the family homestead,  starting the process of land management. In recent years, he has worked to remove invasive species and address erosion issues on the property.

“We support the mission of SAHC because they’re helping us protect this land, and because of the very active hiking program,” notes Ken. We are grateful to Ken and Lotta for their ongoing support, and love seeing them on the trail!

Growing up in a backwoods corner of Unicoi County wasn’t for the faint of heart – but having a main travel route run right by the doorstep could bring a new world of opportunity and excitement to the hearth.

With the main route between Jonesborough, TN and Asheville, NC, running right by the Tilson homestead, travelers – including influential politicians – would often stop to rest a for a night, sharing stories and perspectives of the outside world that nurtured the growing young minds of John Q. Tilson and his siblings. They grew up to have successful careers as doctors, teachers, a federal court judge, and leading US Congressman.

The subsistence farm had a springhouse, grain storage, and smokehouse familiar to many mountain homesteads from the late 1800s, all still standing. To assist with hardships suffered during the Great Depression, John Q., who had prospered as a lawyer, purchased the original homestead tract from his siblings. He often hosted gatherings for friends and family, and the land is now owned collectively by his descendents.

In the 1990s, his daughter, Katharine Tilson Murray, worked with SAHC to permanently protect  the 377-acre tract with a conservation easement.

“Placement of the conservation easement on this property, and providing for SAHC in her estate planning, enabled it to be preserved,” said Ken Murray. “My mother had a vision, and we are very grateful for that.”

Ken notes that as families grow, they typically divide their homestead into smaller and smaller pieces over time. “The conservation easement alleviates a lot of pressure on future generations because it has to be owned as one parcel,” adds Ken. The family plans to own and enjoy this property for many years to come.

John Quillin Tilson, or John Q. as he was frequently known, served as a US Representative from Connecticut for almost 22 years and House Majority leader for six. He spent early life on the Tilson homestead. With roots tracing back to the Mayflower, Tilson’s family had migrated to the Nolichucky River and then to a secluded cove south of Erwin, TN.

“In this house, humble though quite the best in the community, entirely without the aid of doctors and nurses, were born eight children,” he remarked in a published account of The Tilson Family.

They lived in the existing log cabin on the property, until his father built the 2-story white farmhouse in 1879. Moving to New Haven, Connecticut, in later years, John Q. frequently returned to his birthplace, and festive gatherings on the homestead attracted influential leaders from across the area. 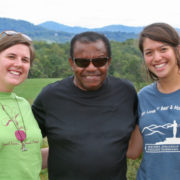 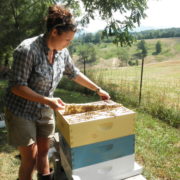 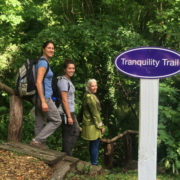 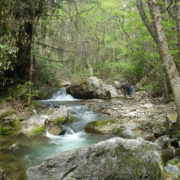 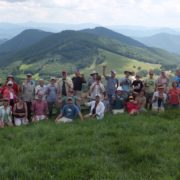 Hurray for Volunteers! At Cataloochee Ranch with Nature Valley & NPCA 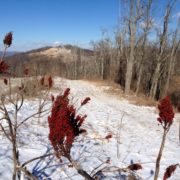 Hiking in the Rough Creek Watershed: A respite from winter's cabin fever.