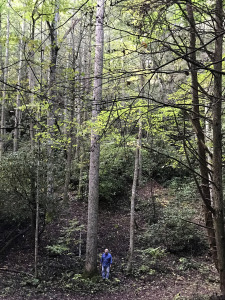 When Margaret Robbins and Thomas Schacht wanted to purchase a forested tract southeast of Johnson City years ago, they set out to do so in order to permanently protect the land. Last month, the couple completed the donation of the tract to Southern Appalachian Highlands Conservancy (SAHC), fulfilling their goal to preserve the land.

“This place is very close to my heart, and I’m so glad to have it protected,” shares Margaret. “It became very clear to me early on that we were the temporary custodians of this place – and I’ve done everything I could do to keep the land healthy. We were so glad that we were able to connect with SAHC to make long-term conservation of the land possible. Working with SAHC’s Land Protection Director Michelle Pugliese was a joy.” 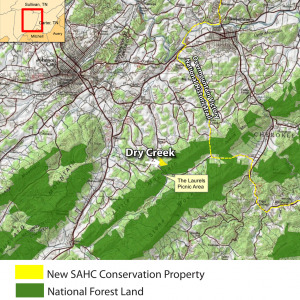 Margaret and Tom own a farm bordering the Dry Creek tract on the northwest slope of Little Mountain in Carter County, TN, less than a mile from The Laurels Picnic Area. Twenty years ago, they saw that the forested slope behind the farm was on a path to be subdivided and developed, so their family purchased it with the long term vision to conserve the property. In the ensuing years, they have cared for the land and set out on mindful projects to improve stewardship of the forest and wildlife habitat. In November, they donated the 67-acre parcel to Southern Appalachian Highlands Conservancy, with the intent that it would become part of Cherokee National Forest in the future.

“That was always our original purpose in acquiring the land, to protect it,” says Tom. “And now we’ve reached a point in life where we are downsizing and want to ensure that the land is protected going forward.”

The tract shares a boundary with Cherokee National Forest and can be seen by visitors going to The Laurels Picnic Area.  An ephemeral spring leading to Dry Creek runs along one edge of the property.

“A lot of water flows down into the creek from the mountain, especially in spring,” says Margaret. “There is an understory of rhododendron and a canopy of maple, hemlock, some pine, and oak coming through. The land was logged about 60 years ago, and the forest has been regenerating since then. I was able to secure Lari beetles (Laricobius nigrinus) to help protect the hemlock trees on the mountain from the invasive hemlock woolly adelgid. We’ve seen a lot of wildlife getting pushed onto the tract as properties surrounding the area have been developed, so we set up wildlife cameras and have enjoyed watching the images of a mama bear with two cubs. We’ve also seen the usual wildlife – deer, skunks, raccoon, fox, and an occasional blue heron that comes through.” 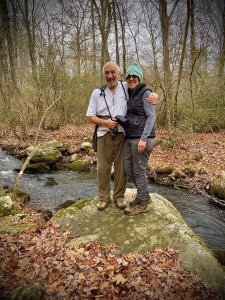 “I was raised in New Jersey, in an area that had lots of open space and a dairy farm located behind our house,” continues Margaret. “We loved finding all the interesting and spooky things in nature. Now, there are no longer any farms there. When we heard that this tract was up for sale about 20 years ago with the potential plans for subdivision and development, we wanted to preserve it. Having seen and experienced that loss of open space in my childhood home, I have a deep appreciation for the importance of undeveloped land and wanted to make sure it is available for future generations as well. We’ve seen what that loss looks like and didn’t want it to happen here.”

Tom also has a deep appreciation for nature and environmental care, stretching back to childhood.

“I grew up on 600 acres in Connecticut organically farmed by my father – before organic farming was even a thing,” shares Tom. “He had seven children and taught all of us to respect the land and respect nature. One of his favorite sayings was ‘I see God in every blade of grass.’ That’s one of the values I grew up with, and Margaret shares that value as well.”

“It is a property I have used as an escape,” adds Margaret. “I am so glad that it all came together and we were able to donate the land for it to remain protected.” 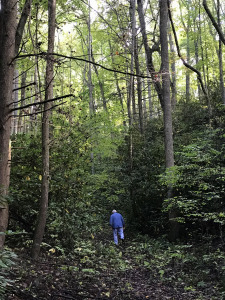 As Tom and Margaret began the process for permanent conservation of the land, they contacted Cherokee National Forest and Southern Appalachian Highlands Conservancy about the tract becoming part of the national forest. Because land transactions with our agency partners can take time, sometimes years to complete, Southern Appalachian Highlands Conservancy has a long-established reputation of working with landowners and forest service partners to assist in the addition of public lands. As a non-profit organization, we are often able to move more quickly to complete initial transactions – which can be an important factor for landowners. SAHC plans to own and manage the property as a nature preserve, until it can be transferred to become part of Cherokee National Forest.

“With gently sloping topography at elevations ranging from 1,900 feet to 2,100 feet, these 67 acres could have been lost to development if it were not for the generosity and dedication of Margaret Robbins and Tom Schacht,” says Land Protection Director Michelle Pugliese. “We are grateful to Margaret and Tom for having the vision to preserve this property, and to our partners in the forest service for working with SAHC in order to add to public lands. We deeply appreciate the generous contributions made by SAHC supporters to cover transaction costs so that this project could be accomplished.”

This is a story still in development, as we continue to research the history of the land. Be sure to check back for updates and look for the Dry Creek article in our upcoming View from the Highlands newsletter! 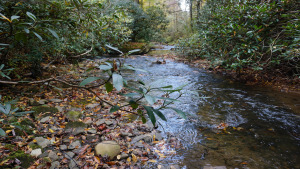