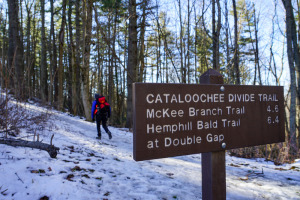 You know that feeling when you get ready to embark on an adventure? The building excitement… the thrill of the first moment you step foot on a trail… That setting is so important – it sets the tone and context for your experience. Unfortunately, many of the public lands and trails in the Southern Appalachians are bordered by forests and fields on private lands which, as an area increases in popularity, could be developed for residential or commercial uses – forever changing the experience for those seeking serenity in outdoor recreation. 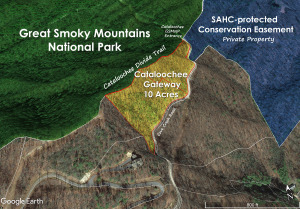 “We are so grateful to the Overholser and Hultquist family for helping SAHC successfully protect this slice of land along the Cataloochee Divide Trail at the entrance to the national park,” said Conservation Director Hanni Muerdter. “We will own and manage it in the short term as forested habitat buffering the park, and we hope to transfer the land to become part of the Great Smoky Mountains National Park.” 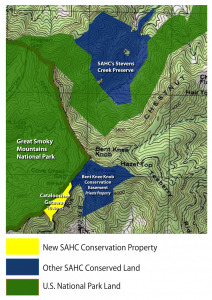 The 10 acres that SAHC recently purchased at the Cataloochee Gateway were once part of a larger parcel of land owned by the Hultquist family. Kay Hultquist worked with SAHC to permanently protect the family’s 65-acre tract nearby in 2000 through a conservation easement, preserving wildlife habitat that buffers the national park, scenic views in the landscape, and 2,000 linear feet of stream. Kathy Overholser (husband Jim), Chip Hultquist (wife Teri), and Joe Hultquist carry on the conservation legacy of their parents, Kay and Charles Hultquist, honoring their love of the mountains and continuing to help preserve these important natural spaces. 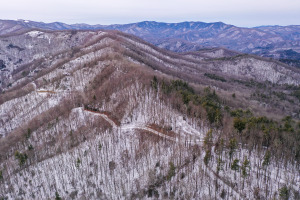 The idea to protect the park entrance by generously donating funds to SAHC to purchase the land and eventually transfer it to the national park resonated with Kathy and Jim Overholser, who spearheaded the Hultquist family’s fundraising effort for this project. It has culminated in the successful land purchase to protect the ridgeline and the Cataloochee gateway to the park.

“The preservation of these 10 acres prevents development right at the trail,” says Jim Overholser. “There is an access road right at the gap, at the park boundary, and the land there could have easily been developed. We’re pleased to help SAHC protect the ridgeline and park entrance. We’ve been lifetime members of SAHC since 1979, and conservation has always been an aspect of our lives. It’s an important thing to do.”

We are grateful to the Overholser and the Hultquist families for their continued support and commitment to conservation, to Brad and Shelli Stanback, and to all our members for making conservation successes like this possible! 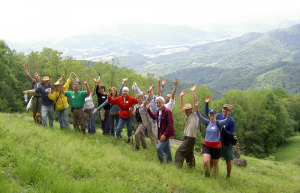 Kathy Overholser recalls her mother, Kay Hultquist, as an “interesting person” with a deep love for the mountains. Many SAHC members may remember participating in the Wild Edibles hikes that Kay enjoyed leading, often joined by son Chip Hultquist.

Kay grew up in Jacksonville, FL, the middle child of three girls. Their father was a textile engineer, and their mother possessed a robust sense of adventure. Each summer, she would drive the girls to Massachusetts to visit family, exhibiting remarkable independence and gumption as a woman driving long east coast journeys alone with three children in the 1920s.

“When my mom was quite young, she and her two sisters and mother would drive from Jacksonville to New England every summer by car because my mother’s grandmother lived up there,” recalls Kathy. “My grandmother was quite the adventurer. Then the girls would go up to a camp in Maine for the better part of the summer. That’s how my mom became interested in the outdoors. In 1927-28, my grandmother took the girls to live in the Swiss Alps for a year. There my mother really fell in love with mountains. When she graduated from the Florida State College for Women [now Florida State University], she went to the University of Tennessee for her graduate degree, where she met my dad. My father was from Alcoa in East Tennessee, and he grew up hiking in the mountains.” 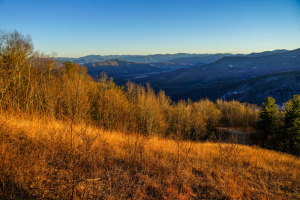 Charles and Kay Hultquist married and moved to Western North Carolina, living in rental cottages near Lake Junaluska. Kathy reflects that it was probably Kay who sparked the quest for mountain land, though both were interested in the outdoors and camping. They purchased ‘Bent Knee Knob,’ a tract of land at Cove Creek Gap, in 1945. At the time the property was mostly open fields from the gap to the crest, having been previously used for grazing.

Jim Overholser shared that the couple “were interested in camping and wrote one of the first campground guides.” Vacation Campgrounds: A Guide to Public Campgrounds by Charles and Kay Hultquist was published 1956. They began with the southeast guide, and then continued to produce guides for other areas of the country. “They went hiking all the time in the Great Smoky Mountains National Park,” says Kathy.

Kathy’s parents sold the Bent Knee Knob land to her grandfather at one point, which provided funds for them to build a house in Maryville, TN. The family continued to enjoy the property and fondly referred to it as “Grandpa’s Mountain.”

“We would drive over from TN to visit it, going through the Great Smoky Mountains National Park; there was no interstate at the time,” Kathy says. “We would go as kids and hike all around the property.”

During the period when her grandfather owned it, the ten acres on the opposite side of the Cove Creek Road, which SAHC recently acquired, were sold off. The Bent Knee Knob land later passed back to Kathy’s parents and then to their children. 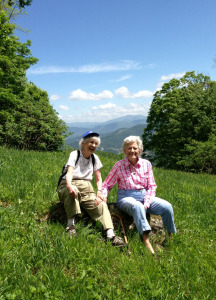 Kay Hultquist and Betty Skinner in 2013

Kathy recalls one adventure in 1965, organized by her mother, in which Kay, her sister Betty with several of her children, and Kathy and her brother and their friends (all teenagers at the time), embarked on an overnight camping trek in the area. “There were ten of us, and we left one car down in Cataloochee and one up at the gap. We started at the gap going along the park boundary, following the fence line. The Cataloochee Divide Trail existed but wasn’t well-maintained at the time. We hiked up and down, up and down, for three days, camping all along the divide.”

The family continued to enjoy periodic visits to hike their property. Perhaps following in her parents’ footsteps, Kathy met Jim in the University of TN hiking club. Some of their closest friends from the hiking club would join them to hike on the property and also help in land management activities. The land holds very special memories for the couple – Jim and Kathy were married on the property in 1973.

When Kay committed the 65 acres at Bent Knee Knob to conservation in 2000, she permanently protected the family’s legacy for conservation, along with wildlife habitat buffering national park land, scenic views, and water resources.

Kathy says it is important to the family to stay involved in SAHC and conservation in general. Jim says, “It’s important to preserve the land. When Kathy’s parents purchased the property back in 1945, there was no development in the area at the time. There were some subsistence farms, but many of them were going away. Now, the whole of Western North Carolina has a tremendous amount of second homes and development. It’s important to support organizations like SAHC that are involved in land protection and species protection.”

We are so grateful to the Hultquist and Overholser families for their continued support and engagement in conservation!

Please note: the Bent Knee Knob property is protected through a conservation easement, which is a voluntary legal agreement to permanently restrict development of the property. The land remains in private ownership of the family (not open to the public). Conservation easements provide an option for landowners to conserve their land, preserving natural resources and open spaces, while retaining the ability to live on or use the land, sell it, or pass it to heirs. Click here for more information about conserving your land, or learn more about conservation easements. 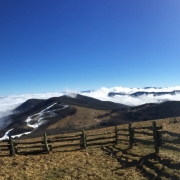 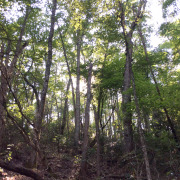 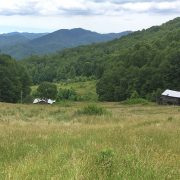 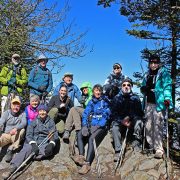 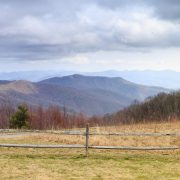