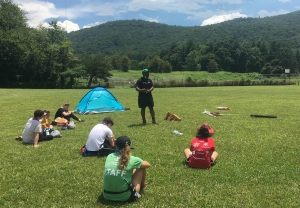 Earl B. Hunter, Jr., founder of Black Folks Camp Too, speaks of bringing people together in unity to enjoy the great outdoors. Former Vice-President of Sales at SylvanSport and a recognized speaker in the outdoor recreation industry, Earl began his company as a way to bring all people together to experience and benefit from outdoor recreation. He says they are creating an educational portal, and the campfire in their logo is a way to bring people together for discussion. We were excited to partner with Earl and Black Folks Camp Too during the summer to host outdoor recreation events for two local youth programs – Youth Transformed for Life and the YMCA Horizons program.

Earl shared stories about the cross-country camping trip he and his son enjoyed a couple of years ago. He brought tents and gear so students could try their hands at the outdoor life. Some students started off hesitant about sitting in the grass or trying to put up a tent, while others who had been camping before made quick work of the set-up game. Earl says that it’s important to get these students together, to learn from and share experiences with each other and open the way for people of all races and backgrounds to enjoy the outdoors. 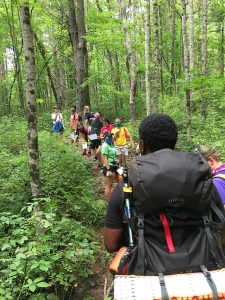 Former AmeriCorps member Hannah Latragna organized and helped lead the events as part of her youth education programs. She says that the students “ended up being captivated by Earl’s storytelling ability and were able to forget their discomfort as they listened to him tell stories about his trip with his son.”

“He explained that as he traveled across the country to many different campsites he and his son only ran into one other black family,” says Hannah. “Earl realized this is an issue and used his influence as a former executive in the field to begin to change the minds and hearts of those both those in the industry and of black folks who had never felt invited into outdoor spaces before. By the end of the day most students raised hands when asked if they would like to try camping for real. They loved working as a team to figure it out by themselves. Earl added encouragement but did not step in to show them the steps, and students realized ‘Wow,  I figured it out on my own with my friends’.” 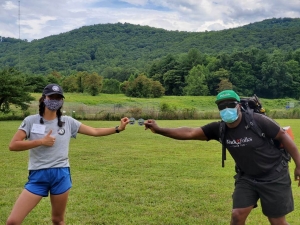 “Black Folks Camp Too is a state of mind, and we want to delve into the reasons why black people do not camp. We are a marketing consultant firm, and our mission is to make the outdoors more fun more accessible, more delightful and a learning experience for the black community. We believe that this particular idea entails getting more black folks into the outdoors, getting them around the campfire, and getting them on the trails.

The campfire in our logo holds so much weight to me because I believe that’s where we are going to change the world… when we get black folks, white folks, all folks around the campfire to have amazing conversations. I want to make sure that my children’s children’s children understand that the outdoors is for them, is appreciated by them and  they can take care of it. We just want to make sure that we are inviting black folks to the outdoors.”