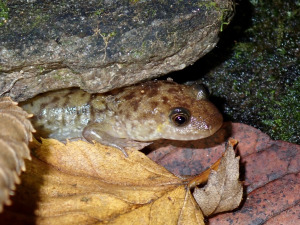 Have you seen a salamander lately? These vibrantly speckled and spotted amphibians come bearing good news. If you’ve seen them in an area you have hiked or explored, the water quality and habitat of that area is probably pretty good! Salamanders are sensitive to environmental changes, so finding an abundance of salamanders means the land and water are healthy for other species, too — including humans. Conservationist Tom Ward has discovered that night is the best time to photograph these shy but enchanting creatures. 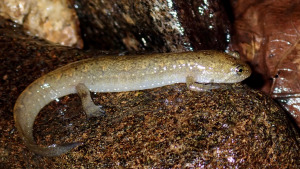 “My great-grandfather built a cabin on the property 95 years ago, and the property has been in my family ever since,” recalls Tom. His family wanted to ensure that this special place was never developed, so they worked with Southern Appalachian Highlands Conservancy (SAHC) to permanently protect 114 acres with a conservation easement in 2011. A mile and half of stream corridor through the property creates excellent habitat for salamanders. With a Masters degree in biology, Tom has a particular interest in documenting species on the property and has reported his findings to the NC Natural Heritage Program, contributing to citizen science in the state. So far he has identified 10 species of salamander on the family’s protected land. 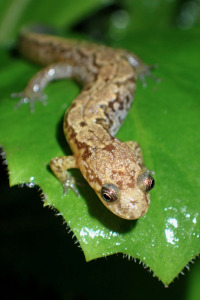 “With North Carolina being the center of biodiversity for salamanders, it is a great place to study salamanders,” says Tom. “Amphibians are very sensitive to environmental changes, so salamanders are a good indicator species for the health of the mountain.”

Last summer, Tom spent time hiking his family’s property at night, and discovered it was a wonderful time to photograph salamanders. “They’re nocturnal creatures, so night is a time you can find them out and about in their natural habitat,” he says.

Tom described the salamander species he has documented: “The most aquatic one, which you hardly ever find out of the creek, is Desmognathus quadramaculatus – the black-bellied salamander. Also in the creek we find the seal salamander (Desmognathus mondicola) and spring salamander (Gyrinophilus porphyriticus).” 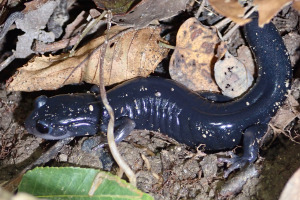 “A little further out you may find some Carolina mountain dusky salamanders (Desmognathus carolinensis), and the eft stage of the red-spotted newt (Notophthalmus viridescens) can be found all over, especially after a good rain.”

“We have three species of Plethodon: the Blue Ridge gray-cheeked salamander (Plethodon amplus), which has a limited range; the white-spotted slimy salamanders (Plethodon cylindraceus), which are pretty ubiquitous in the upland parts of the mountain; and the Yonahlosseee salamander (Plethodon yonahlossee), which can be found among boulder fields and rock outcroppings. In addition to the main creek and its tributaries, the three Plethodon species on our easement benefit greatly from the abundance of north-facing rock outcroppings & boulder fields; the Blue Ridge gray-cheeked & Yonahlossee salamanders are most abundant in these areas.” 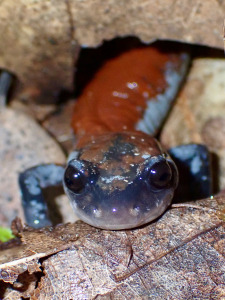 “The Blue Ridge two-lined salamander (Eurycea wilderae) gets out and about in the mountain in the summer and you don’t see it as much, but in October it comes back to the creek to breed. The red salamander (Pseudotriton ruber) we’ve found only a few times – it prefers muddy areas.”

Tom has a deep interest in the value of conservation and scientific discovery. He catalogs and shares observations of salamanders, as well as plants, moths, and other critters via iNaturalist, contributing to the cumulative collection of biodiversity data in the Southern Appalachian mountains.  He has been actively managing invasive plants on the conservation easement, “which is vital to preserving ecological function.”

“I also worked with North Carolina Wildlife Resource Commission to collect genetic samples (tail tips) from our Blue Ridge gray-cheeked & Yonahlossee salamander populations as part of a larger study they are doing of these salamanders,” says Tom. “They were interested in the gray-cheeked as part of the on-going research related to potential designation as a threatened or endangered species.”

Watch an interview with Tom highlighting his stunning salamander photography. 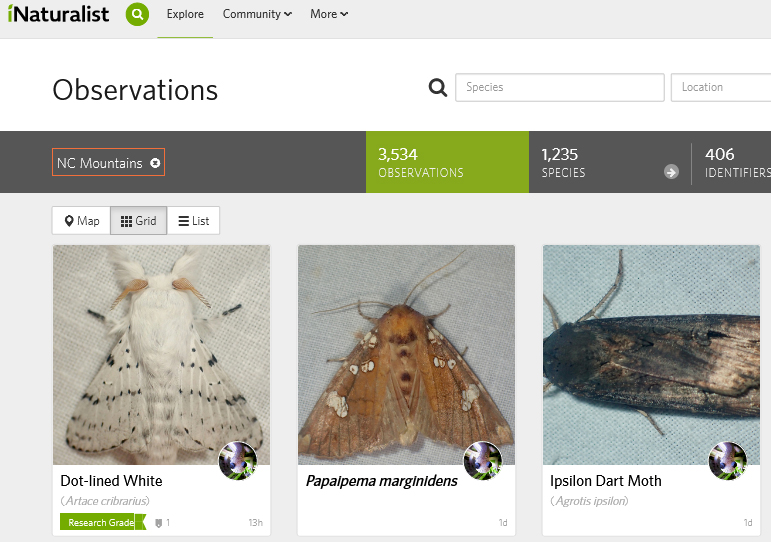