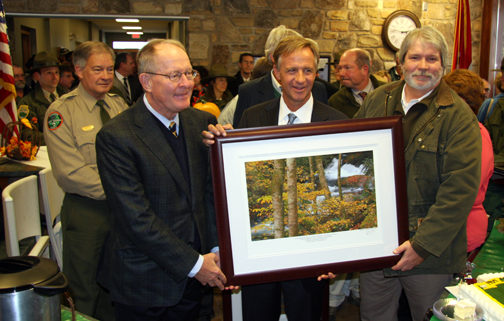 Plans for Tennessee’s 55th state park on the stunning Rocky Fork tract were announced on a chilly October day, with early snow still blanketing the ground and a swelling group of attendees packed into the Tennessee Welcome Center off I-26 in Erwin, TN.

Tennessee Gov. Bill Haslam, U.S. Sen. Lamar Alexander and Tennessee Department of Environment and Conservation Commissioner Bob Martineau joined members of the General Assembly, local elected officials and members of the community on Tuesday, October 30, for a special ceremony announcing the future conveyance of more than 2,000 acres in the Rocky Fork area of Unicoi County, that will eventually become Tennessee’s 55th state park.

The property is part of the 10,000-acre tract acquired by The Conservation Fund and U.S. Forest Service in 2008, and will be conveyed to the state of Tennessee in the coming months.

Located along the Appalachian Trail corridor and the Tennessee-North Carolina border near Asheville, Rocky Fork is named after the cool waters that run down its center. The property is adjacent to more than 22,000 acres of U.S. Forest Service-designated wilderness, including Sampson and Bald mountains. Before Rocky Fork’s acquisition by The Conservation Fund and U.S. Forest Service, it was one of the largest unprotected tracts in the southern Appalachian Mountains.

The future development of Tennessee’s 55th state park has been made possible through the leadership of Gov. Haslam, the Tennessee Department of Environment and Conservation, the Tennessee Wildlife Resources Agency and through the very generous support of The Conservation Fund and U.S. Forest Service. Federal funding for the Rocky Fork land acquisition was made possible through the extraordinary efforts of Sen. Lamar Alexander and the Tennessee Congressional Delegation to secure support from the Land and Water Conservation Fund and through significant private contributions totaling more than $4 million. Other key partners include the Southern Appalachian Highlands Conservancy, TWRA, Tennessee Heritage Conservation Trust Fund,  Appalachian Trail Conservancy, Unicoi and Greene counties, and the Upper East Tennessee Region.

The entire Rocky Fork wilderness area provides a wide range of world-class recreational opportunities, including hiking the popular Appalachian Trail, fishing more than 16 miles of blue-ribbon trout streams, and hunting bear, turkey, deer and grouse. The area is also home to both state and federally endangered species, including the Peregrine falcon.