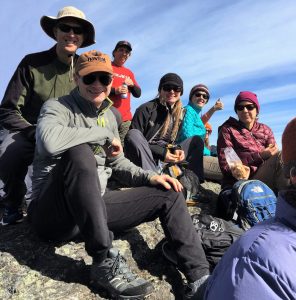 On November 11th a group of intrepid hikers set out to on a partnership hike with SAHC and Highland Brewing!  We could not have asked for a more perfect day to be in the mountains. We had sunny blue skies and cool temperatures.  The Thunderstruck Hike, named after Highland’s seasonal Thunderstruck Coffee Porter, traverses Blackrock Ridge.  The hike is a challenging one but passes through many diverse ecosystems! The group was definitely up for the demanding trek, everyone moved quickly, not fazed at all by the steep uphill climbs.

The first big climb put us on top of Yellow Face Mountain which sits at 6,032ft in elevation! On top of this Southern Sixer is an open field filled with blackberry brambles. 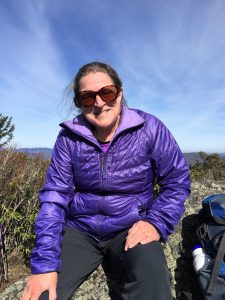 These high elevation forests only grow above 5,000ft and are home to many animals including flying squirrels, saw whet owls, and the spruce-fir moss spider!  The group was on the lookout for flying squirrels, but did not have any luck.  We did see some red squirrels and a variety of moss and lichen!

We hiked down and down into the saddle between the peaks and spotted a few old logging relics along the trail.  Soon the trail began ascending again.  It  was gradual at first, passing by beautiful moss covered boulders and the SAHC Blackrock conservation easement.  As we neared the summit the trail steepened. There were spots we had to scramble up boulders to stay on the trail.  We emerged from the final Rhododendron tunnel to see the Blackrock Summit!  This summit is a large rocky outcrop with almost 360° views, including views of Thunderstruck Ridge!  The group ate lunch and prepared for the hike back, knowing they would once again have to climb up Yellow Face Mountain.  All in all it was a great day in Balsam Mountains.