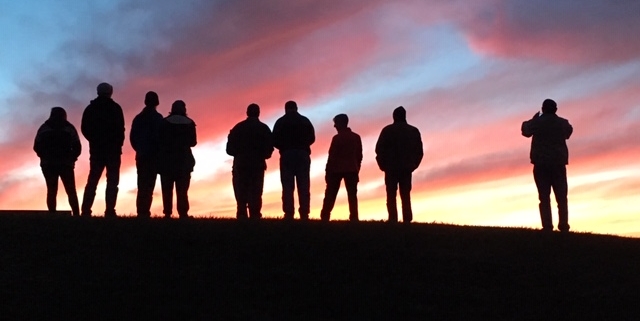 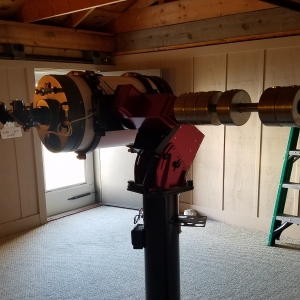 The car shook back and forth, the sound of gravel crushing and grinding under the weight of the tires during the steep mountain ascent. Suddenly, I reached the top, and the world opened up in a breathtaking view with a sky hundreds of miles long. Wave after wave of mountains sloshed against the horizon line, growing darker in blue hue the further my eye traveled. To my back, in the west, the sun was beginning to set. The stage was prepped for a captivating night of stargazing.

I walked just over the hillside to see a small cottage with its roof slid open, like a sliding glass door. Inside Bernie Arghiere, well known astronomer with the Astronomy Club of Asheville, calmly and happily commenced setting up the massive, 16-inch telescope mounted in the middle of the floor. The observatory sits on top of Grassland Mountain in Marshall, NC, and tonight, people from across the area were coming to experience a special Stargazer Outing. 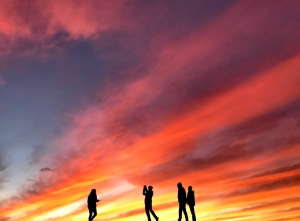 I walked inside to catch up with Bernie, and we gazed with worry at the streaking clouds overhead, thinking about the nearby tropical storm which threatened to obscure the stars this evening. As the sun continued to set, however, our fear of the clouds slowly turned into wonder. The clouds seemed to flicker over the edge of the observatory like the tips of a flame. Drawn to them like a moth, I stepped outside to see the sky erupt into roaring red, as if it had been lit by a match. The Stargazer Outing guests had arrived in time to enjoy the magnificent sight, their silhouettes engulfed in its brilliance. Here we paused, admiring the sheer beauty of the Earth.

After a short introduction, Bernie brought us into the observation room along with two other astronomers from the Astronomy Club of Asheville. The telescope was already raised high into the sky, pointing through a small gap in the clouds where a beaming star blinked through. We discovered it was not a star but one of the great gas giants of the sky — Jupiter.

Bernie stepped aside and left the eyepiece open for anyone to gaze into. There was a brief amount of hesitation amongst the group, eager to view the planet but balancing respect for others. After a few seconds, SAHC’s Nature Director Lauren McTigue stepped forward. Carefully she brought her head down to meet the ey-

“OH MY GOSH!” she said, springing up from the telescope. She quickly brought her head back down.

“No freaking way!” she continued to exclaim as her eye remained glued to the eyepiece. Her gaze stretched far from our tiny mountain top in North Carolina, piercing through the atmosphere past the Moon, the planet Mars and the asteroid belt until finally, reaching almost 500 million miles, her eyes were fixed on the great swirling storm clouds of Jupiter. 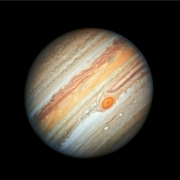 Jupiter as seen through the Hubble Space Telescope ©Nasa.gov

“The image in which you see takes time for our eyes to see,” Bernie explained. “Light takes time to travel from the sun, hit Jupiter, then reflect back to our eye. Due to this, you are currently looking at Jupiter as it was 49 minutes ago. So if you’d like to see what it looks like right now, come back in 49 minutes.” He laughed.

The crowd experienced a mix of astonishment and awe as they took turns looking through the telescope — each look followed by an exclamation of amazement or perplexity. I smiled, and my heart warmed to witness guests amazed by the sky and sharing their curiosity.

The night tarried along as the Earth spun further into its own shadow, the sky rotating above us. Each time we pointed the mirrored beast to another section of the sky, the clouds seem to rip open for us, revealing another swath of stars. More planets met our eyes such as Saturn and Uranus, star clusters like the Owl Cluster in Cassiopeia glittered through the glass, and even the faint Ring Nebula made it through the clouds. The night sky seemed infinite.

After a few hours the night grew cold and bitter. Many guests left to return to their warm homes while I and a couple others remained, adding more layers and blankets until we looked like Nordic warriors. After a few more observations, we made our salutations to Bernie and the other astronomers and departed the mountain as well. Even though we had ended our night, the stars never stopped their show and will still shine brightly for billions of years to come.