Hiking in the Roan Highlands, you may have had the experience of leaving the sunny, open grassy balds to dip your head into the dark shade of adjacent spruce-fir forests. Like the grassy balds, these remnant, boreal forests host multiple federally engaged species. New efforts to conserve and restore high elevation spruce-fir forests complement SAHC’s decades-long program of restoration and habitat management of Appalachian grassy bald

Why is Spruce-fir Forest Special? 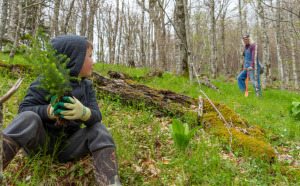 During the last ice age, red spruce and Fraser fir dominated the southern Appalachian forest. But as the climate warmed, the spruce-fir forests gradually retreated north to Canada and to the tops of the highest peaks in the Southern Appalachians, above 5,000 feet in elevation. Logging during the 19th and 20th centuries reduced the extent of spruce-fir forest in the southern Appalachians by up to 60%, as fast-growing hardwoods replaced forests which had been cut. These forests were further degraded by acid precipitation and the invasive balsam woolly adelgid. However, now the largest threat to these forests is climate change, with warming temperatures and changes in rainfall. 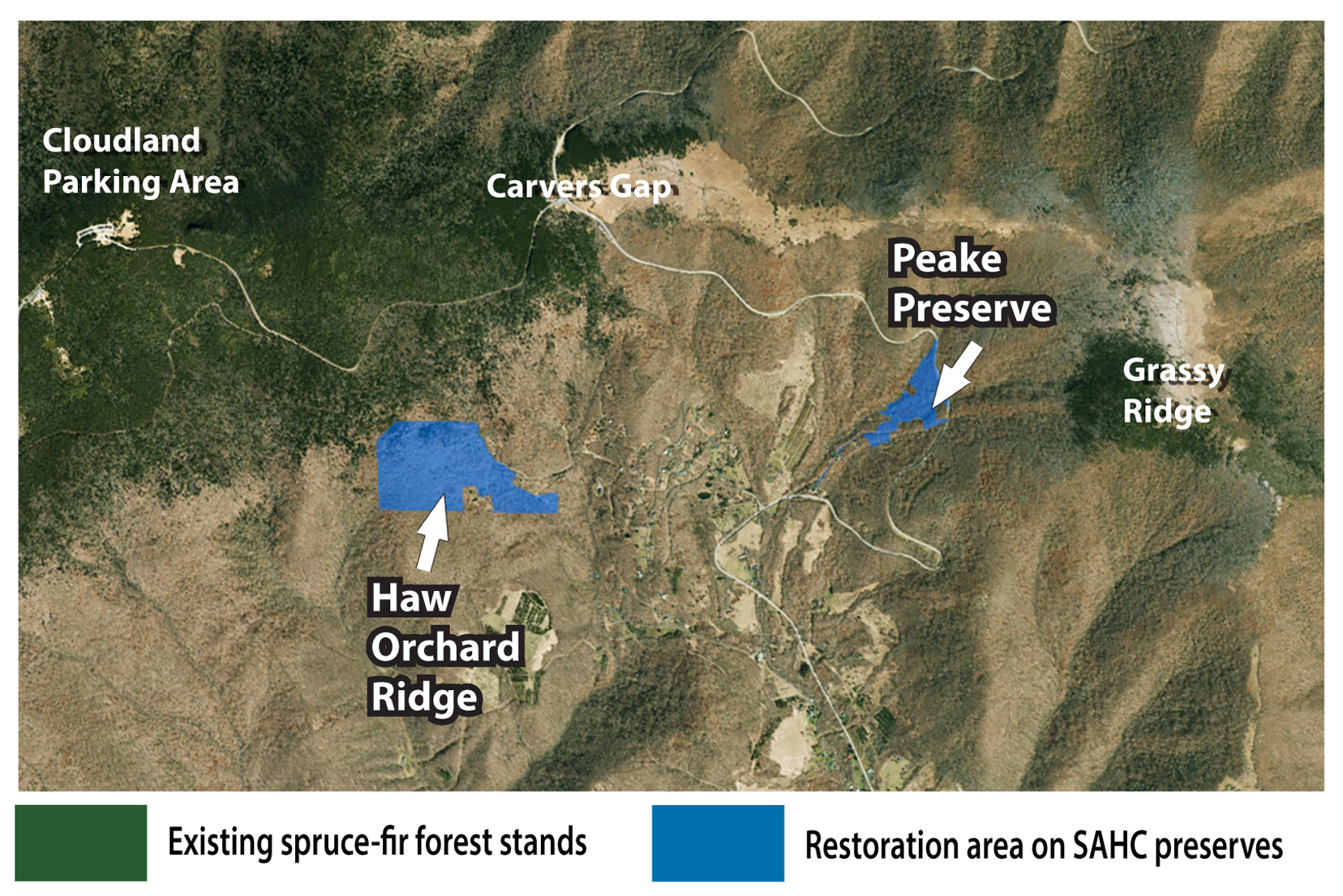 Bridging the gap: these forest restoration efforts on SAHC preserves will help connect existing spruce-fir forest stands in the Highlands of Roan.

SAHC is an active member of the Southern Appalachian Spruce Restoration Initiative (SASRI) who is working to restore red spruce on high elevation sites throughout our region. By expanding and connecting habitat “islands” of spruce, SASRI partners hope to expand and connect habitat for rare and endangered species. For the past three years, SAHC has been putting restoration techniques to work on high elevation preserves in the Roan Highlands.

In 2019, SAHC received a grant from the Cornell Lab of Ornithology Land Trust Bird Conservation Initiative to work on red spruce restoration in the Roan Highlands. We used low impact forestry techniques to girdle single hardwoods and “release” understory red spruce to the canopy, giving them sunlight. We also worked with Warren Wilson College to conduct experiments into the impacts of ground cover on red spruce seedling recruitment and we collected seeds for restoration.

By Spring 2021, the seeds collected from Haw Orchard had been grown into healthy seedlings. We partnered with Wicked Weed Brewing through a grant from Keep America Beautiful to coordinate lots of volunteers and plant over 5,000 of those red spruce seedlings on our Haw Orchard Ridge and Peake preserves.

On a landscape scale, these plantings will eventually be part of a habitat corridor, connecting spruce stands on Roan High Knob and Grassy Ridge for wildlife movement. On a preserve scale, they will provide habitat for conifer dependent birds, like Red Crossbill and Saw-whet Owl, while shading priority trout streams as hemlock and beech trees are lost. This tireless work from partners and volunteers ensures that future generations will have the chance to explore these magical forests for years to come.

From NC to WV and Back Again 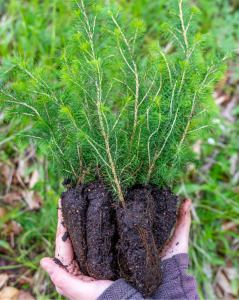 Ready to plant! These seedlings grew from seed collected on the SAHC preserves.

SAHC’s red spruce forest restoration project developed out of a decade-plus commitment to spruce restoration across the Southern and Central Appalachians.

Roan Stewardship Director Marquette Crockett, who worked as a Wildlife Biologist with Canaan Valley National Wildlife Refuge in West Virginia, met Dave Saville 15 years ago when they were both involved in the fledgling Central Appalachian Spruce Restoration Initiative.

“Together we have literally planted tens of thousands of spruce in West Virginia,” laughs Marquette. So, it seemed like a natural fit to ask Dave, of Appalachian Spruce Restoration, to collect red spruce seed from our Haw Orchard Preserve and grow those seedlings for restoration. In 2021, thousands of those seedlings returned to the Roan Highlands.

Red spruce only “fruit” (produce cones) every four to eight years – so collecting seed means you have to know when it’s a fruiting year and where to find them. The process requires very specific knowledge, from gathering cones to extracting the seeds. In nature, the cones hang upside down until they dry out, become battered by the weather, and dry again — releasing a few seeds at a time over the course of seasons. Dave’s operation mimics the natural patterns of weather with kilns and tumblers.

After the seeds have been extracted, he works with commercial nurseries that can grow them into seedling “plugs” (young plants grown in individual cells to be transplanted) that can be safely packaged and shipped to conservation groups or individuals for planting.

“Dave has worked really hard to make connections with commercial nurseries and create a process to produce seedlings for restoration efforts,” says Marquette. “It’s particularly gratifying to know that the seedlings planted at Haw Orchard Ridge have their parent trees on the same preserve.” A quick survey this summer showed that almost all of our seedlings are surviving and have put on 0.5-1 inch of new growth — we can’t wait to see these sites in another 5 or 10 years!

Joel Adams – 1% for the Planet
Scroll to top