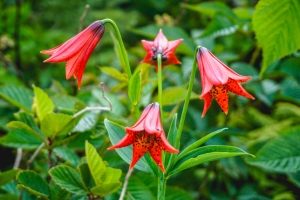 If you’re out traipsing high elevation mountains and meadows across WNC this July, you might spy the stunning red-orange trumpet of a Gray’s lily (Lilium grayi) bloom. Please look but don’t touch! This rare native flower has been suffering from a fungal disease that may be spread by contact. The Lily Leaf Spot Disease kills juveniles and reduces reproduction in adults, creating a grim forecast for the future of these beautiful blooms.

First identified by famous American botanist Asa Gray in the Highlands of Roan in 1840, Gray’s lily occurs at high elevations in North Carolina, Tennessee and Virginia, on grassy balds and in moist forests and wet meadows. They bloom in June and July, creating brilliant displays beloved by nature photographers and naturalists. Already listed as Threatened in NC, Gray’s lily populations have been suffering from the wide spread of disease caused by the fungal phytopathogen Pseudocercosporella inconspicua. Indications of the disease occur as tan spots on the leaves, stems, and reproductive portions of the lily. SAHC, in partnership with the US Forest Service and Appalachian Trail Conservancy, recently posted educational signs along the Appalachian Trail in the Highlands of Roan to raise awareness about the Gray’s lily and try to slow spread of the disease. impacts other native lilies, including Canada and Turk’s Cap lily, but Gray’s lily seems to be most susceptible. 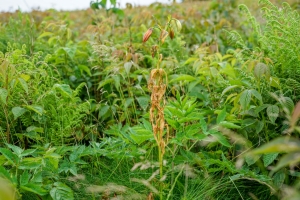 This summer, intern Ilan Bubb has also been working on computer models to help predict potential Gray’s lily habitat, hoping to help find populations that have not yet been impacted by disease.

“The fungal disease is found in large extent from the Roan Massif to Virginia,” says Ilan. “If we can find new communities or isolated populations, they may be more resilient or have not yet come in contact with the fungal disease.”

Ilan is a Stanback Intern from the Duke Nicholas School of the Environment, pursuing his Master of Environmental Management with a concentration in ecosystem science and conservation. He will be working with SAHC through late July to complete a Gray’s lily habitat model using a process first implemented by a professor with the Duke Nicholas School of the Environment for marine geospatial modeling. According to Ilan, the process works even better when applied to plants, because they don’t migrate like marine mammals. 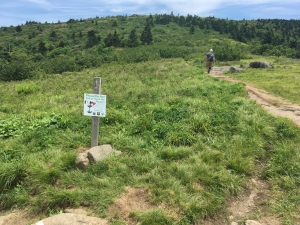 “We have known locations for Gray’s lilies and variables associated with those locations — soil types, temperature, precipitation, land cover type, aspect (which direction the terrain is facing), elevation, and slope,” Ilan explains. “So, we can use these variables as defined for known populations of Gray’s lily to create geospatial models and predict where we might find additional populations of the plant. The model looks for other areas within the study parameters — from Georgia to Pennsylvania — that have similar attributes. Hopefully, with this modeling we can narrow down potential habitat to smaller parcels instead of thousands of acres — to better predict where Gray’s lily populations may be located.”

So far, Ilan has identified places as far north as northwest Virginia as potential habitat, with several SAHC properties highlighted.

“It’s really cool seeing the numbers — the variables — turn into something visual you can see, map, and go visit to see how well the model is working.” 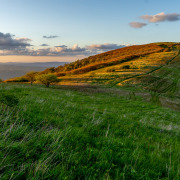 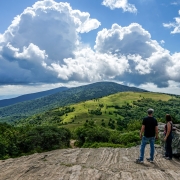 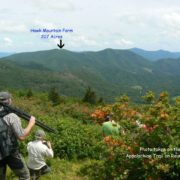 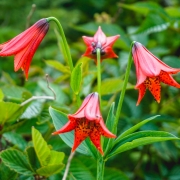 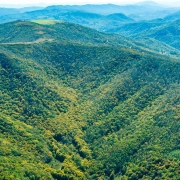 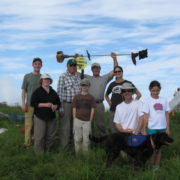